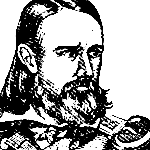 "But nothing could stop the survivors. They leaped over the cannon, and drove the artillerists from their positions, at the point of the sword.  The fiercest struggle of that day, was the resistance to this charge."

The Battle of Resaca de la Palma was one of the early engagements of the Mexican War, where United States General Zachary Taylor engaged the retreating forces of the Mexican Ejército del Norte ("Army of the North") under General Mariano Arista on May 9, 1846.

ON THE NIGHT OF THE NINTH OF MAY, 1846, while the battle was raging at Resaca de la Palma, thousands of people lined the shores of the Rio Grande, listening to each burst of artillery with breathless suspense.  News of victory had reached them the preceding day, but no conquerors had returned in triumph to the city.  And now the dread roar of cannon, swelling louder, and fiercer, and nearer — what did it portend?  The fire of the city was abandoned, and the cheering suppressed; and pale, anxious faces, gazed in racking silence in the direction of battle.  Soon the dread reality was disclosed; infantry and cavalry burst madly from the thicket, dashing aside garment and weapon, as they swept toward the river.  Crowd on crowd of terrified soldiers now came from the chaparral, and rushed toward the city.  Soon dense masses filled to sinking the little flat provided for their conveyance.  The next moment they were hurled into the river by the reckless cavalry, who in their turn were swept away.  Mules loaded with wounded and dying were plunged in, and numbers were precipitated from the shore.  It was an awful scene.  Horse trampled over horse, crushing their riders to earth, and trailing their bridles and furniture along the ground; the river was foaming with life, while plunge after plunge announced the sad fate of numbers more; the shouts of officers, curses of soldiery, yells of the wounded, and shrieks of the drowning, were appalling.  Wretched beings grasped the flat in agony, only to be murdered by those upon it; and scores of mules, and hundreds of soldiers, clenched in each other's embrace, sunk to a watery grave.

Yet dreadful as was this scene, it was but the shadow of what Matamoras witnessed during the night.  Mules were continually entering the city, laden with wounded, whose piercing shrieks, as their wounds poured afresh at each step, rose above the din and hurry of trampling armies.  All discipline or order was at an end, and thousands of infuriated soldiers poured along the streets for rapine and plunder.  Women fled to the ballrooms where preparations for victory had been made, and tore the wreaths and ornaments from the walls.  Scarcely had they done so, when hordes of lawless rancheros burst upon them, in the hurry of uncontrolled passion.  Crime and debauchery reveled that night in the halls of Matamoras.

Such were the scenes in Matamoras on the 9th of May.  What a comment upon war!  American soldiers had gained a victory.  But where was their advantage?  Were they morally, physically, or intellectually better, or was their country and its rulers richer or happier?  They had won the title of invincible; and glory, military renown, was theirs.  But what is glory?  Who of all that lay down weary and wounded that night, could have defined the advantages of glory?  And another class — those over whom the wolves and eagles were battening — how were they enriched by glory?  But when we turn from them to the scenes we have been attempting to describe — when we hear the wailings of the widowed mother, the groans of the mangled, the shrieks of injured innocence, and the shouts of unbridled passion, — then comes a solemn whisper, Is this glory?  A field after battle is dreadful; where death arbitrates between man and man, and unites foes in silent harmony. But war — its advantages and glories — must be learned at the soldier's home.

And the most conspicuous soldier on that terrible day was Captain Charles May.  In the march from Corpus Christi, he performed efficient, though inconspicuous, service, in scouring the country with his dragoons, and preparing the road for the main army.  While General Zachary Taylor, commander of the American forces, remained at Point Isabel, during the bombardment of Fort Brown, May was sent to escort Captain Walker in his effort to open a communication between the two places.  This he performed on the night of the 3d of May, but not being able to effect a rejunction with Walker, he returned toward Point Isabel, galloping round the army of the enemy, by way of reconnaissance.

About twelve miles from the American position, he was opposed by more than one hundred lancers, whom he charged, broke, and drove three miles.  His horses were so worn down by long exposure that he found it impossible to keep up with the enemy, or he might have completed his victory by the capture of many.  Fearing therefore that his useless labor might only terminate in his being surprised, he returned to Point Isabel.

At Palo Alto, the nature of the movements in both armies deprived May of any opportunity to signalize himself.  Just before the fall of Ringgold, he was ordered to advance his squadron for the purpose of diverting the heavy fire of the enemy from the American infantry, and, if possible, to charge the Mexican cavalry.  The enemy were in such force, however, that the latter operation was impracticable ; and during the remainder of the day, May remained but a passive spectator.

When the obstinate resistance of the enemy at Resaca de la Palma, made it evident that a charge must be made, before the victory would be complete.  General Taylor ordered May to capture the Mexican batteries.  This was the opportunity which that brave officer had been anxiously looking for, and riding to the front of his horsemen, he called out to them to follow.  The next moment they were sweeping toward the enemy.  Before being perceived by them, May was stopped by Lieutenant-colonel Ridgeley, who was just on the point of firing, in order to draw the shot of the enemy.  When this was done, May again dashed forward, and in a few minutes, was by the muzzles of the cannon.  Suddenly, a tremendous discharge poured forth along the ranks of the intrepid horsemen, and horses and men rolled headlong on the ground.  But nothing could stop the survivors.  They leaped over the cannon, and drove the artillerists from their positions, at the point of the sword.  The fiercest struggle of that day, was the resistance to this charge.  The Mexican batteries were defended by the celebrated regiment of Tampico Veterans, who were regarded as invincible.  They threw themselves furiously between their guns, and with their swords and bayonets, fought hand to hand with the cavalry.  One by one they sunk beneath the weapons of their adversaries, and even when their regiment was broken and crushed, one of them endeavored to sustain its honor by wrapping its flag about him in order to bear it away.  Had their last discharge been aimed a little lower, they would have swept the entire command of Colonel May.

In this charge, General la Vega, the commander of the Mexican forces, was captured, and safely conveyed to the American camp.  The distinguished prisoner received much attention from both officers and men, and when subsequently conducted through different parts of our country, he was every where treated as a gallant soldier and a gentleman.  When captured, he was in the act of applying an ignited match to one of the pieces; Captain May charged forward and commanded him to surrender.  The general asked, "Are you an officer?" and being answered in the affirmative, he delivered his sword, with the remark: "General la Vega is a prisoner."  After the battle May's troops were pushed forward in pursuit of the Mexicans, and succeeded in capturing many prisoners.

After the battle, Captain May's heroics were the subject of song and verse.  Here is a partial example:

Quickly then he to us rode, while his heart with daring glowed,
The high heroic heart of the gallant Captain May —
And we saw his beard and hair, streaming back upon the air.
As, passing on, he shouted — "Charge!" and boldly led the way.

Oh! they heard us from afar, ringing out our wild hurrah.
And they looked on one another, and their swarthy cheeks were pale;
For they felt that, if we came, though they vomited out flame,
Nor cannon balls, nor musketry, nor courage could avail.

First, we broke into a trot, till we felt the foemen's shot,
Then, like resistless torrent, or a storm-wind in its wrath.
Onward, onward we went dashing — o'er the breastwork we went crashing,
And, through and through the Mexicans, we cut our bloody path.

Hand to hand, with the brand, wherever they would stand.
We cut, and we thrust, and we galloped to and fro —
Till they scattered were pell-mell, like the bursting of a shell,
And we thought it all unmanly to strike a flying foe.

Honor to "Rough and Ready," with his mien so calm and steady,
And honor to brave Captain May, and honor to the slain —
Worthy subject of old Runes were the onslaught of dragoons.
Who fought the fight, and won the fight, upon our Texian plain!