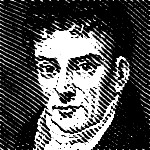 "On the very morning appointed for the trial, Fulton was aroused from his sleep by a messenger, who rushed into his chamber, pale and breathless, exclaiming, 'Oh, sir, the boat has broken in pieces and gone to the bottom!' "

A self-educated engineer, and inventor of the first viable steamship, first practical submarine, and first torpedo in history, Robert Fulton was a true example of American ingenuity and practical achievement.

IT IS A CURIOUS AND REMARKABLE FACT in the history of invention that between conception and achievement lies a gulf which many men of the greatest genius fail to bridge. The difficulty commonly lies not in making the invention, but in adapting it to the conditions; in a word, making it practical.   Robert Fulton is distinguished as an inventor who has this great title to fame. He was not the inventor of steam navigation; he was not even the first man to build a steamboat; but he was the man who brought steamboats into practical use, doing successfully the work which needed to be done.

Fulton was the son of a farmer of Lancaster county, Pennsylvania, where he was born in 1765. He was a dull boy at study, but very expert at drawing, and always fond of machinery, for which he often neglected his lessons. His teacher once remonstrated with him upon his course, and, failing to convince him by argument, rapped him sharply over the knuckles with a ruler, telling him he would make him do something.  Looking his tutor sternly in the face, he replied, "Sir, I came here to have something beat into my brains, not into my knuckles."

Having determined to be an artist, Fulton went to Philadelphia, where he formed a friendship with Franklin. His success was rapid, and when only twenty-one he went to England to study. There he met Watt, who had just produced his steam engine, which Fulton studied enthusiastically; and he was persuaded to give up the profession of art and become an engineer.  Convinced that the steam engine could be applied to navigation, he plunged into experiments, in which he was joined by Robert R. Livingston, then minister to France, whose daughter Harriet afterward became Fulton's wife. Several- models made by Fulton convinced Mr. Livingston that he had overcome the cause of the failure of other inventors, and it was finally agreed between them to build a large boat for trial on the Seine. This experimental steamer was furnished with paddlewheels, and was completed early in 1803.

On the very morning appointed for the trial, Fulton was aroused from his sleep by a messenger, who rushed into his chamber, pale and breathless, exclaiming, "Oh, sir, the boat has broken in pieces and gone to the bottom!"  Hurrying to the spot, he found that the weight of the machinery had broken the boat in half and carried the whole structure to the bottom of the river. He at once set to work to raise the machinery, devoting twenty-four hours, without resting or eating, to the undertaking, and succeeded in doing so, but inflicted upon his constitution a strain from which he never entirely recovered.

The machinery was very slightly damaged, but it was necessary to rebuild the boat entirely. This was accomplished by July of the same year, and the boat was tried in August with triumphant success, in the presence of the French National Institute and a vast crowd of the citizens of Paris.  This steamer was very defective, but still so great an improvement upon all that had preceded it, that Messrs. Fulton and Livingston determined to build one on a larger scale, in the waters of New York. Having resolved to return home, Fulton set out as soon as possible, stopping in England on his return, to order an engine for his boat from Watt and Boulton. Scientific men and amateurs all agreed in pronouncing Fulton's scheme impracticable; but Fulton went on with his work, his boat attracting great attention and exciting no less ridicule.

The steam engine ordered from Watt and Boulton was received in the latter part of 1806; and in the following spring the boat was launched from the shipyard of Charles Brown, on the East river. Fulton named her the "Clermont," after the country seat of his friend and partner, Chancellor Livingston. She was one hundred and thirty feet long, eighteen feet wide, and seven feet deep. The boat was completed about the last of August, and she was moved by her machinery from the East river into the Hudson, and over to the Jersey shore. This trial, brief as it was, satisfied Fulton of its success, and he announced that in a few days the steamer would sail from New York for Albany.

Monday, September 11, 1807, the time set for sailing, came, and expectation was at its highest. The friends of the inventor were in a state of feverish anxiety lest the enterprise should come to grief, and the scoffers on the wharf were all ready to give vent to shouts of derision. Precisely as the hour of one struck, the moorings were thrown off, and the "Clermont" moved slowly out into the stream. Volumes of smoke rushed forth from her chimney, and her wheels, which were uncovered, scattered the spray far behind her. The spectacle was certainly novel to the people of those days, and the crowd on the wharf broke into shouts of ridicule. Soon, however, the jeers grew silent, for it was seen that the steamer was increasing her speed. In a little while she was fairly under way, and making a steady progress up the stream at the rate of five miles per hour. The incredulity of the spectators had been succeeded by astonishment, and now this feeling gave way to undisguised delight, and cheer after cheer went up from the vast throng.

In a little while, however, the boat was observed to stop, and the enthusiasm at once subsided. The scoffers were again in their glory, and unhesitatingly pronounced the boat a failure. Their chagrin may be imagined when, after a short delay, the steamer once more proceeded on her way, and this time even more rapidly than before. Fulton had discovered that the paddles were too long, and took too deep a hold on the water, and had stopped the boat for the purpose of shortening them. Having remedied this defect, the "Clermont" continued her voyage during the rest of the day and all night, without stopping, and at one o'clock the next day ran alongside the landing at Clermont, the seat of Chancellor Livingston. She lay there until nine the next morning, when she continued her voyage toward Albany, reaching that city at five in the afternoon.

On her return trip, she reached New York in thirty hours running time exactly five miles per hour. The river was at this time navigated entirely with sailing vessels. The surprise and dismay excited among the crews of these vessels by the appearance of the steamer was extreme. These simple people beheld what they supposed to be a huge monster, vomiting fire and smoke from its throat, lashing the water with its fins, and shaking the river with its roar, approaching rapidly in the face of both wind and tide. Some threw themselves flat on the decks of their vessels, where they remained in an agony of terror until the monster had passed, while others took to their boats and made for the shore in dismay, leaving their vessels to drift helplessly down the stream.

The introduction of the steamboat gave a powerful impetus to the internal commerce of the Union. It opened to navigation many important rivers whose swift currents had closed them to sailing craft, and made rapid and easy communication between the most distant parts of the country practicable. The public soon began to appreciate this, and orders came in rapidly for steamboats for various parts of the country. Fulton executed these as fast as possible, and among the number several for boats for the Ohio and Mississippi rivers. Fulton followed up the "Clermont" in 1807 with a larger boat, called the "Car of Neptune," which was placed on the Albany route as soon as completed. The Legislature of New York had enacted a law, immediately upon his first success, giving to Livingston and himself the exclusive right to navigate the waters of the State by steam, for five years for every additional boat they should build in the State, provided the whole term should not exceed thirty years.

In 1809 Fulton obtained his first patent from the United States, and in 1811 he took out a second patent. His patents were limited to the simple means of adapting paddle-wheels to the axle of the crank of Watt's engine. Meanwhile the power of the Legislature to grant the steamboat monopoly was denied, and a company was formed at Albany to establish another line of steam passage boats on the Hudson, between that city and New York. Fulton and his partner asked an injunction, which was refused, whereupon the State Legislature passed a special act confirming their monopoly. Years of litigation followed, continuing until after Fulton's death; and, finally, the eloquence of Daniel Webster prevailed against the monopoly, the Supreme Court of the United States deciding, in the famous "steamboat case," that all navigable waters are under the sole jurisdiction of the United States, and free alike to all citizens.

In January, 1815, Fulton was summoned to Trenton, New Jersey, as a witness in one of the numerous suits which grew out of the efforts to break down his monopoly. During his examination he was very much exposed, as the hall of the Legislature was uncommonly cold. In returning home, he crossed the Hudson in an open boat, and was detained on the river several hours. This severe exposure brought on an attack of sickness, which for a short time confined him to his bed. The steam frigate, then almost ready for her engines, occasioned him great anxiety at the time, and before he had fairly recovered his strength he went to the shipyard to give some directions to the workmen employed on her, and thus exposed himself again to the inclemency of the weather. In a few days his indisposition prostrated him again, and, growing rapidly worse, he died on the 24th of February, 1815, at the age of fifty years.