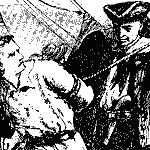 "To such an extent was this insult to our flag carried that our Government had the record of about forty-five hundred cases of impressment from our ships between the years of 1803 and 1810; and when the War of 1812 broke out the number of American sailors serving against their will in British war vessels was variously computed to be from six to fourteen thousand."

Our young nation fought a second war for independence with the cry, "Free trade and sailors' rights!"

BY THEIR FIRST WAR with Great Britain our forefathers asserted and maintained their right to independent national existence; by their second war with Great Britain, they claimed and obtained equal consideration in international affairs.  The War of 1812 was not based on a single cause; it was rather undertaken from mixed motives, — partly political, partly commercial, partly patriotic.  It was always unpopular with a great number of the American people; it was far from logical in some of its positions; it was perhaps precipitated by party clamor.  But, despite all these facts, it remains true that this war established once for all the position of the United States as an equal power among the powers.

Above all — clearing away the petty political and partisan aspects of the struggle — we find that in it the United States stood for a strong, sound, and universally beneficial principle — that of the rights of neutral nations in time of war. "Free ships make free goods" is a maxim of international law now universally recognized, but at the opening of the century it was a theory, supported, indeed, by good reasoning, but practically disregarded by the most powerful nations. It was almost solely to the stand taken by the United States in 1812 that the final settlement of the disputed principle was due.

The cause of the War of 1812 which appealed most strongly to the patriotic feelings of the common people, though, perhaps, not in itself so intrinsically important as that just referred to, was unquestionably the impressment by Great Britain of sailors from American ships.  No doubt great numbers of English sailors did desert from their naval vessels and take refuse in the easier service and better treatment of the American merchant ships.

Great Britain was straining every nerve to strengthen her already powerful navy, and the press-gang was constantly at work in English sea-ports.  Once on board a British man-of-war, the impressed sailor was subject to overwork, bad radons, and the lash.  That British sailors fought as gallantly as they did under this regime will always remain a wonder.  But it is certain that they deserted in considerable numbers, and that they found in the rapidly-growing commercial prosperity of our carrying trade a tempting chance of employment.

Now, Great Britain, with a large contempt for the naval weakness of the United States, assumed, rather than claimed, the right to stop our merchant vessels on the high seas, to examine the crews, and to claim as her own any British sailors among them.  This was bad enough in itself, but the way in which the search was carried out was worse.  Every form of insolence and overbearing was exhibited.  The pretense of claiming British deserters covered what was sometimes barefaced and outrageous kidnaping of Americans.  The British officers went so far as to lay the burden of proof of nationality in each case upon the sailor himself; if he were without papers proving his identity he was at once assumed to be a British subject.

To such an extent was this insult to our flag carried that our Government had the record of about forty-five hundred cases of impressment from our ships between the years of 1803 and 1810; and when the War of 1812 broke out the number of American sailors serving against their will in British war vessels was variously computed to be from six to fourteen thousand. It is even recorded that in some cases American ships were obliged to return home in the middle of their voyages because their crews had been so diminished in number by the seizures made by British officers that they were too short-handed to proceed.

In not a few cases these depredations led to bloodshed. The greatest outrage of all, and one which stirred the blood of Americans to the fighting point, was the capture of an American war vessel, the "Chesapeake," by the British man-of-war, the "Leopard."  The latter was by far the more powerful vessel, and the "Chesapeake" was quite unprepared for action; nevertheless, her commander refused to accede to a demand that his crew be overhauled in search for British deserters.  Thereupon the "Leopard" poured broadside after broadside into her until the flag was struck.

Three Americans were killed and eighteen wounded; four were taken away as alleged deserters; of these, three were afterwards returned, while in one case the charge was satisfactorily proved and the man Avas hanged. The whole affair was without the slightest justification under the law of nations and was in itself ample ground for war.  Great Britain, however, in a quite ungraceful and tardy way, apologized and offered reparation.

This incident took place six years before the actual declaration of war. But the outrage rankled all that time, and nothing did more to fan the anti-British feeling which was already so strong in the rank and file, especially in the Democratic party. It was such deeds as this that led Henry Clay to exclaim, "Not content with seizing upon all our property which falls within her rapacious grasp, the personal rights of our countrymen — rights which must forever be sacred — are trampled on and violated by the impressment of our seamen.  What are we to gain by war? What are we not to lose by peace? Commerce, character, a nation's best treasure, honor!"

The attack on American commerce was also a serious danger to peace.  In the early years of the century Great Britain was at war not only with France, but with other European countries.  Both Great Britain and France adopted in practice the most extreme theories of non-intercourse between neutral and hostile nations.  It was the era of "paper blockades." In 1806 England, for instance, declared that eight hundred miles of the European coast were to be considered blockaded, whereupon Napoleon, not to be outdone, declared the entire Islands of Great Britain to be under blockade.

Up to a certain point the interruption of the neutral trade relations between the countries of Europe was to the commercial advantage of America.  Our carrying trade grew and pros- pered wonderfully. Much of this trade consisted in taking goods from the colo- nies of European nations, bringing them to the United States, then trans-shipping them and conveying them to the parent nation. This was allowable under the international law of the time, although the direct carrying of goods by the neutral ship from the colony to the parent nation (the latter, of course, being at war) was forbidden.  But by her famous "Orders in Council" Great Britain ab- solutely forbade this system of trans-shipment as to nations with whom she was at war.  American vessels engaged in this form of trade were seized and condemned by English prize courts.
Naturally, France followed Great Britain's example and even went further.  Our merchants, who had actually been earning double freights under the old system, now found that their commerce was wofully restricted. At first it was thought that the unfair restriction might be punished by retaliatory measures, and a quite illogical analogy was drawn from the effect produced on Great Britain before the Revolution by the refusal of the colonies to receive goods on which a tax had been imposed.  So President Jefferson's Administration resorted to the most unwise measure that could be thought of — an absolute embargo on our own ships.

This measure was passed in 1807, and its immediate result was to reduce the exports of the country from nearly fifty million dollars' worth to nine million dollars' worth in a single year. This was evidently anything but profitable, and the act was changed so as to forbid only commercial intercourse with Great Britain and France and their colonies, with a proviso that the law should be abandoned as regards either of these countries which should repeal its objectionable decrees.

The French Government moved in the matter first, but only conditionally. Our non-intercourse act, however, was after 1810 in force only against Great Britain. That our claims of wrong were equally or nearly equally as great against France in this matter cannot be doubted.  But the popular feeling was stronger against Great Britain; a war with England was popular with the mass of the Democrats; and it was the refusal of England to finally accept our conditions which led to the declaration of war.

By a curious chain of circumstances it happened, however, that between the time when Congress declared war (June 18, 1812) and the date when the news of this declaration was received in England, the latter country had already revoked her famous "orders in council." In point of fact, President Madison was very reluctant to declare war, though the Federalists always took great pleasure in speaking of this as "Mr. Madison's war." The Federalists throughout considered the war unnecessary and the result of partisan feeling and unreasonable prejudice.

It is peculiarly grateful to American pride that this war, undertaken in defense of our maritime interests and to uphold the honor of our flag upon the high seas, resulted in a series of naval victories brilliant in the extreme.  It was not, indeed, at first thought that this would be chiefly a naval war.  President Madison was at one time greatly inclined to keep strictly in port our war vessels; but, happily, other counsels prevailed.

The disparity between the American and British navies was certainly disheartening. The United States had seven or eight frigates and a few sloops, brigs, and gunboats, while the sails of England's navy whitened every sea, and her ships certainly outnumbered ours by fifty to one. On the other hand, her hands were tied to a great extent by the European wars of magnitude in which she was involved. She had to defend her commerce from formidable enemies in many seas, and could give but a small part of her naval strength to the new foe. That this new foe was despised by the great power which claimed, not without reason, to be the mistress of the seas was not unnatural.

But soon we find a lament raised in Parliament about the reverses, "which English officers and English sailors had not before been used to, and that from such a contemptible navy as that of America had always been held."  The fact is that the restriction of our commerce had made it possible for our navy officers to take their pick of a remarkably fine body of native American seamen, naturally brave and intelligent, and thoroughly well trained in all seaman-like experiences.  These men were in many instances filled with a spirit of resentment at British insolence, having either themselves been the victims of the aggressions which we have described, or having seen their friends compelled to submit to these insolent acts.  The very smallness of our navy, too, was in a measure its strength; the competition for active service among those bearing commissions was great, and there was never any trouble in finding officers of proved sagacity and courage.