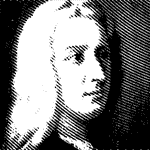 "Spain had ever considered the English settlement of Georgia as an encroachment on her territory, and had cherished the intention to seize every proper occasion to dislodge the English by force.  With this view, an armament consisting of two thousand men, commanded by Don Antonio di Ridondo, embarked at Havana, under convoy of a strong squadron, and arrived at St. Augustine in May."

In 1739, English forces, with support of Georgia colonists and American Indian allies, fought the invading Spanish armada and halted Spanish expansion in North America, and in the end, without firing a shot.

Taken from, Marshall, John. "A history of the colonies planted by the English on the continent of North America, from their settlement to the commencement of that war which terminated in their independence (Abraham Small: Philadelphia, 1824).  Edited by Gary M. Bohannon.

In 1739, the minister of England, Sir Robert Walpole, was pressured to abandon the uneasy truce that had existed with Spain over the territories of Florida and Georgia; and war was declared.  A squadron commanded by admiral Vernon was detached to the West Indies, with instructions to act offensively; and general James Oglethorpe was ordered to annoy the settlements in Florida.  He planned an expedition against St. Augustine, and requested the assistance of South Carolina.  That colony, ardently desiring the expulsion of the Spanish, alike feared and hated, entered zealously into the views of the general, and agreed to furnish the men and money he requested.  A regiment, commanded by a colonel Vanderdussen, was immediately raised in Virginia and the two Carolinas.  A body of Indians was also engaged, and captain Price, who commanded the small fleet on that station, promised his cooperation. These arrangements being made, and the mouth of St. John's river, on the coast of Florida, being appointed as the place of rendezvous, general Oglethorpe hastened to Georgia, to prepare his regiment for the expedition.

Those unexpected impediments, which always embarrass military movements conducted by men with- out experience, having delayed the arrival of his northern troops, Oglethorpe entered Florida at the head of his own regiment, aided by a party of Indians; and invested Diego, a small fort about twenty-five miles from St. Augustine, which capitulated after a short resistance.  He then returned to the place of rendezvous, where he was joined by colonel Vanderdussen, and by a company of Highlanders under the command of captain McIntosh; a few days after which, he marched with his whole force, consisting of about two thousand men, to fort Moosa, in the neighborhood of St. Augustine, which was evacuated on his approach.

The general now perceived that the enterprise would be attended with more difficulty than had been anticipated.  In the time which intervened between his entering Florida and appearing before the town, supplies of provisions had been received from the country, and six Spanish half-galleys carrying long brass nine-pounder cannon, and two sloops laden with provisions, had entered the harbor. Finding the place better fortified than had been expected, he determined to invest it completely, and to advance by regular approaches.  In execution of this plan, colonel Palmer, with ninety-five of the Highlanders, and forty-two Indians, remained at fort Moosa, while the army took different positions near the town, and began an ineffectual bombardment from the island of Anastasia.  The general was deliberating on a plan for forcing the harbor and taking a nearer position, when colonel Palmer was surprised by a Spanish force, and his detachment was cut to pieces.  At the same time some small vessels from the Havana, with a reinforcement of men and supply of provisions, entered the harbor through the narrow channel of the Matanzas.

The army began to despair of success; and the provincials, enfeebled by the heat, dispirited by sickness, and fatigued by fruitless efforts, marched away in large bodies.  Captain Price,  his small fleet being ill-supplied with provisions, and the season for hurricanes approaching, was unwilling to hazard his majesty's ships on that coast.  General Ogelthorpe, laboring under a fever, finding his regiment, as well as himself, worn out with fatigue, and rendered unfit for action by disease; reluctantly abandoned the enterprise, and returned to Frederica, on St. Simons Island, Georgia.

The colonists, disappointed and chagrined by the failure of the expedition, attributed this misfortune entirely to the incapacity of the general, who was not less dissatisfied with them.  Whatever may have been the true causes of the failure, it produced a mutual and injurious distrust between the general and the colonists.  The events of the war soon disclosed the dangers resulting from this want of confidence in general Oglelthorpe, and, still more, from the want of power to produce a cooperation of the common force for the common defense.

Spain had ever considered the English settlement of Georgia as an encroachment on her territory, and had cherished the intention to seize every proper occasion to dislodge the English by force.  With this view, an armament consisting of two thousand men, commanded by Don Antonio di Ridondo, embarked at Havana, under convoy of a strong squadron, and arrived at St. Augustine in May.  The fleet having been seen on its passage, notice of its approach was given to general Oglethorpe, who communicated the intelligence to governor Glenn of South Carolina, and urged the necessity of sending the troops of that province to his assistance.

Georgia was a buffer zone for South Carolina, as far as the Spanish were concerned, and the many advantages of fighting the Spaniards on the frontier, away from their homes, were too obvious not to be perceived: yet either from prejudice against Oglethorpe, or the disposition inherent in separate governments to preserve their own forces for their own defenses, Carolina refused to give the general any assistance.   The colony’s attention was directed entirely to the defense of Charleston; and the inhabitants of its southern frontier, instead of marching to the camp of Oglethorpe, fled to that city for safety.  In the mean time, the general collected a few Highlanders, and rangers of Georgia, together with as many Indian warriors as would join him, and determined to defend Frederica.

Late in June, the Spanish fleet, consisting of thirty-two sail, carrying above three thousand men, crossed Simon's bar into Jekyl sound, and passing Simon's fort, then occupied by general Oglethorpe, proceeded up the Alatamaha River, out of the reach of English guns; after which, the Spanish troops landed on the island, and erected a battery of twenty eighteen-pounder cannon.

Fort Simon's now being indefensible, Oglethorpe retreated to Frederica.  His whole force, exclusive of Indians, amounted to little more than seven hundred men, a force which could only enable him to act on the defensive until the arrival of reinforcements, which he still expected from South Carolina.  The face of the country was peculiarly favorable to this system of operations; its thick woods and deep morasses posed great obstacles to the advance of an invading enemy, not well acquainted with the paths which passed through them.  Oglethorpe turned these advantages to the best account.  In an attempt made by the Spanish of to pierce these woods in order to reach Oglethorpe at Frederica, several sharp encounters took place; in one of which the Spaniards lost a captain and two lieutenants killed, and above one hundred privates taken prisoner.  Don di Ridondo then changed his plan of operations; and, abandoning his intention of forcing his way to Frederica by land, called in his parties, kept his men under cover of his cannon, and detached some vessels up the river, with a body of troops on board, to reconnoiter the fort, and draw the attention of the English to that quarter.

About this time, an English prisoner escaped from the Spaniards, and informed general Oglethorpe that a difference existed between the troops from Cuba, and those from St. Augustine, which had been carried so far that they encamped in separate places.  This intelligence suggested the idea of attacking them while divided; and his perfect knowledge of the woods favored the hope of surprising one of their encampments.  In execution of this design, he drew out the flower of his army, and marched in the night, unobserved, within two miles of the Spanish camp.  There, his troops halted, and he advanced, himself, at the head of a select corps, to reconnoiter the situation of the enemy. While he was using the utmost circumspection to obtain the necessary information without being discovered, a French soldier of his party discharged his musket, and ran into the Spanish lines. Discovery defeating every hope of success, the general retreated to Frederica.

Oglethorpe, confident that the French deserter would disclose his weakness, devised an expedient which turn- ed the event to advantage.  He wrote to the deserter as if in concert with him, directing him to give the Spanish general such information as might induce him to attack Frederica; hinting also at an attempt meditated by admiral Vernon on St. Augustine, and at late advices from Carolina, giving assurances of a reinforcement of two thousand men.  Ogelthorpe then tampered with one of the Spanish prisoners, who, for a small bribe, promised to deliver this letter to the deserter, after which, he was permitted to escape.  Upon rejoining di Ridondo’s forces, the Spaniard, as was foreseen, delivered the letter to the general, who ordered the French deserter to be put in irons; and, was, in no small degree, unable to determine whether the letter ought to be considered as a stratagem to save Frederica, and induce the abandonment of the enterprise; or as real instructions to direct the conduct of a spy.  While hesitating on the course to be pursued, his doubts were removed by one of those incidents, which have so much influence on human affairs.

The assembly of South Carolina had voted a supply of money to general Oglethorpe; and the governor had ordered some ships of force to his aid.  These appeared off the coast while the principal officers of the Spanish army were yet deliberating on the letter.  They deliberated no longer.  The whole army was seized with a panic; and, after setting fire to the fort, embarked in great hurry and confusion, leaving behind several pieces of heavy artillery, and a large quantity of provisions and military stores.

Thus was Georgia delivered from an invasion which threatened the total subjugation of the province.