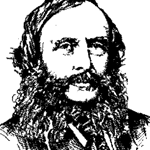 Defender of Grant, prosecutor of an accused Lincoln assassin, Attorney General of the United States, populist proponent of Free Silver, Edwards Pierrepont led an interesting life, and contributed much to his country.

Edwards Pierrepont was born in North Haven, Connecticut, 4 March, 1817. He graduated at Yale in 1837, at the law-school in 1840, and began practice at Columbus, Ohio. In 1845 he removed to New York city, where he became eminent at the bar.

In 1857 he was elected a judge of the superior court of the city of New York, in place of Chief-Justice Thomas J. Oakley. A speech that he made a year-and-a-half before the fall of Fort Sumter, in which he predicted the civil war, attracted much attention.

In October, 1860, he resigned his seat on the bench and returned to the practice of law, and in 1862 he was appointed by President Lincoln, in Executive Order No. 2, issued February 27, 1862, "to examine the cases of the state prisoners remaining in the military custody of the United States, and to determine whether in view of the public Safety and the existing rebellion they should be discharged, or remain in military custody, or be remitted to the civil tribunals for trial."

In 1864 he was active in organizing the War Democrats in favor of the re-election of Abraham Lincoln. In April, 1867, he was elected a member of the convention for forming a new constitution for the state of New York, and one of its judiciary committee.

He was employed to conduct the prosecution on the part of the government of John H. Surratt, indicted for aiding in the murder of President Lincoln. He stated in his closing arguments: "I think, gentlemen, you saw he was telling a falsehood from the very expression of his face. I was very anxious, as this record shows, that he should turn his face towards you. For through his dull and horny eyes I could see lies generating perjuries in his brain, like flies in a rotting carcass, and then a slow stream of slimy larvae drooled from his loathsome mouth, requiring more than all his 'patent pots' find 'patent disinfectants' to cleanse the air of the perjured and polluting odor. There was not a word of truth in anything he said." However colorful Edwards' invective, Surratt was acquitted by reason of a hung jury.

In the presidential contests of 1868 and 1872 he was an ardent supporter of Gen. Grant, by whom he was appointed in 1869 U. S. Attorney for the Southern District of New York. The election of 1868 was bitterly contested between Democrats, with their nominee Horatio Seymour, and the Republican General Grant. The Mobile Tribune opined, "The great Democratic Party will rise in its might, and the dagger of Brutus may aid in accomplishing our redemption from radical rule, ruin and usurpation. If we are successful in the approaching contest we shall gain all that we lost in the 'Lost Cause.'" And Governor Vance of North Carolina described what was at stake stating, "By the election of Seymour and Blair all that the Confederacy fought for will be won."

In Part of a speech given in October, 1868, while campaigning for the General, Pierrepont shows his gift for oratory:

"I have known General Grant since the time when he came from the West to take command of the Army of the Potomac. He has impressed me as one of the most remarkable of men. He has always been a Democrat. To the great principles of the Democratic party (which began to perish with the war,) I have always been attached. I believe in coined gold and not in stamped paper; I believe in liberty protected by law; I believe that the foreign-born, who have adopted our country, and sworn allegiance to our Government, should have the same rights, and the same protection, (under the Constitution,) as the native-born; I believe that the Government should act with even justice upon the rich and the poor; that it should allow the utmost freedom, of trade consistent with its absolute necessities for moderate revenue; that it should not trammel enterprise by legislative monopolies; that as a Government, it should aim at no paltry imitation of Royal or Imperial splendor; but be a simple, economical, stern and just Protecting Power, leaving the individual to whatever of luxury and extravagant display his folly may suggest; that it should relieve its citizens from harassing taxes, by levying the tax upon few articles, in such manner as to compel every man to pay his just share in accordance with his means; that it should have no costly army in time of peace, and that the people should, by 'eternal vigilance' guard against the absorption of the rights of the States by the Central Power.

"Every Rebel hater of our free Government will vote against Grant.

"Every cruel jailor who exposed, starved and robbed our imprisoned soldiers, will vote against Grant.

"Every aider in those crimes against humanity and against civilization, perpetrated at the Libby and at Andersonville, will vote against Grant.

"Every contemner of our flag, despiser of our Government and violator of its benign laws, will vote against Grant.

"Every Rebel raider from Canada, who robbed and murdered the defenseless people of St. Albans. Every inhuman wretch who plotted to poison your waters, burn your cities, and introduced pestilence into all the North, will vote against Grant.

"Every traitor, every conspirator who aided in the murder of President Lincoln, and the assassination of Secretary Seward, will vote against Grant.

"And some good men, blinded by party prejudice or held in bondage by party fears, may vote against Grant.

"But tell me, will any father, the blood of whose only son was shed in his country's cause, vote against Grant?

"Will the surviving soldier, who endured the perils, and now shares the glories of successful war, vote against Grant?

"Will the trustees of the widow and the orphan and the humble laborer, whose little all is in some savings Institution, dependent wholly upon income derived from Government Bonds, vote against Grant?

"Will any Father in the Roman Catholic Church, looking to the welfare of the children of that Church, whose earnings are deposited for safety, and drawing interest from United States securities, vote against Grant?

"Will our adopted fellow citizens, upon whose advice millions of foreign capital have been invested here, vote against Grant?

"Will any intelligent man of business, merchant, banker, manufacturer, salaried clerk, or day-laborer, who wishes stability, security and prosperity for himself and his children, vote against Grant?

"Will any man who does not wish the Nation humbled, treason honored, and patriotism insulted, vote against Grant?

"Consider it well fellow-citizens, — vote deliberately, — vote conscientiously, — vote down the patriot, — vote up the Rebel if you will!! — vote Grant a failure, and Lee, the Hero of the War: — But, — before you thus vote, — tear down these mocking monuments erected to your patriot dead; demolish every memorial stone at Gettysburg, and in every place where a grateful nation has reared a soldier's tomb!

"Level three hundred thousand little hillocks, under which sleep three hundred thousand young men of the country, they died to save; the grass is very green, so watered by mothers' tears, and the roses bloom well, which mourning sisters and bereaved wives have planted on those graves! — Trample them in the earth — they are all a mockery — the sleepers died in an ignoble cause, and well deserved their doom — and the rotting prisoners of the Libby, and the starving, tortured soldiers at Andersonville, had but their just deserts!

"Vote against Grant; and when you see the Rebels, all red with the blood of your mothers' sons, holding high revelry in the Capitol — and confusion, dismay and anarchy in the land — go tell your children: 'We voted for that!'"

In May, 1873, Judge Pierrepont was appointed U. S. minister to Russia, but declined, and in April, 1875, he became Attorney-General of the United States, remaining in the cabinet of President Grant until May, 1876, when he was sent as U. S. minister to Great Britain. As Attorney General, Pierrepont is most often remembered for his contributions to International Law, including opinions that addressed issues of natural and acquired nationality, and grounds for Extradition.

Before Pierrepont's term of service as Minister to Great Britain, the English court rarely gave U.S. presidents and their representatives special treatment. During General Grant's 1877 visit to London, Judge Pierrepont urged upon the queen's ministers the propriety of according the same precedence to him as had been given to other heads of state. This was done, and other governments followed the example of Great Britain.

Judge Pierrepont devoted large attention to the financial system of England. On his return in 1878 he engaged actively in his profession, but afterward retired and has taken especial interest in the financial policy of the country. Pierrepont supported "Free Silver," a populist position supported by farmers as a method of improving crop prices. It was the central issue for Democrats in the presidential elections of 1896 and 1900. In support of a mass meeting in Cooper Union, October 27, 1890, the Judge wrote, "The unconstitutional, fraudulent bill of 1873, devised with much art to deceive and rob the people, has left some dying embers, which a few enemies are trying to blow into flame, which the people will surely soon stamp out. When free coinage is given alike to gold and silver, we shall have prosperous times, and not till then."

Judge Pierrepont received the honorary degree of LL. D. from Columbian college, Washington, D. C, in 1871. In 1873 the same degree was conferred upon him by Yale. While he was in England, Oxford gave him that of D. C. L.

At the age of sixty-six, the elder Pierrepont accompanied his son, Edward, to the Pacific coast, and traveled far into Alaska. Edward's "From Fifth Avenue to Alaska," was published in 1884, and the younger Pierrepont was made a fellow in the Royal Geographical Society of England. Edwards Pierrepont, Judge, Minister, and Attorney General, died March 6, 1892, in New York City.